x Thank you for submitting an inquiry. We will get back to you as soon as we can.
x
x

The Archaeological Group Tour Of Knossos

Follow us and explore the oldest city of Europe and the first organized human civilization. Discover the greatness of the ancient Minoans and walk around the old stone-paths of Knossos, the cradle of Minoan civilization.

The palace of Knossos, the centre of Minoan civilization, was constituted the main force of the island’s population during the Bronze Age. Their civilization as well as the palace was destroyed at the explosion of the Santorini Volcano. The excavation conducted by Arthur Evans 1900-1913 and 1922-1930 brought to light the grand palace of Knossos, along with other great findings of immense importance concerning the culture and the life of the Minoans, which are as of yet kept at the archaeological museum of Heraklion.

The most important monuments of the site are:

The Palace of Knossos. It is the largest of the preserved Minoan palatial centres. Four wings are arranged around a central courtyard, containing the royal quarters, workshops, shrines, storerooms, repositories, the throne room and banquet halls. Dated to 2000-1350 B.C.

The Little Palace. It lies to the west of the main palace and has all the features of palatial architecture: scraped wall masonry, reception rooms, a pristyle hall, a double megaron with polythyra (pi er-and-door partitions) and a lustral basin-shrine. Dated to the 17th-15th centuries B.C.

The Royal Villa. It lies to the NE of the palace and its architectural form is distinguished by the polythyra, the pillar crypt and the double staircase, with two flights of stairs. It is strongly religious in character and might have been the residence of an aristocrat or a high priest. Dated to the 14th century B.C.

House of the Frescoes. It is located to the NW of the palace and is a small urban mansion with rich decoration on the walls. Dated to the 15th, 14th-12th centuries B.C.

Caravanserai. It lies to the south of the palace and was interpreted as a reception hall and hospice. Some of the rooms are equipped with baths and decorated with wall paintings.

The “Unexplored Mansion”. Private building, probably of private-industrial function, to the NW of the palace. It is rectangular, with a central, four-pillared hall, corridors, storerooms and remains of a staircase. Dated to the 14th-12th centuries B.C.

Temple Tomb. It is located almost 600 m. to the south of the palace and was connected with the “House of the High Priest” by means of a paved street. It seems that one of the last kings of Knossos (17th-14th centuries B.C.) was buried here. Typical features of its architecture are the hypostyle, two-pillar crypt, the entrance with the courtyard, the portico and a small anteroom.

House of the High Priest. It lies 300 m. to the south of Caravanserai and contains a stone altar with two columns, framed by the bases of double axes.

The South Mansion. Private civic house, located to the south of the palace. It is a three-stored building with a lustral basin and a hypostyle crypt, dating from the 17th-15th centuries B.C.

Villa of Dionysos. Private, peristyle house of the Roman period. It is decorated with splendid mosaics by Apollinarius, depicting Dionysos. The house contains special rooms employed for the Dionysiac cult. Dated to the 2nd century A.D.

What is included in this tour?

What is not included in this tour?

Our trip starts in Chania.

After we pick you up with our bus from your hotel or a location in its vicinity, we head to Heraklion, which we reach about three hours later. On the way to Heraklion we make a stop near Rethymnon for a few minutes.

Our first stop is the palace of Knossos, through whose premises you will be guided by our guide. The tour lasts one hour.

Subsequently we head to the centre of Heraklion, where you have plenty of time to eat and shop. While there, you also have the chance to visit the archaeological museum of Heraklion with our guide and to admire up close murals and objects from the palace you have just visited.

After a more or less three-hour stay in Heraklion we head back to Chania. Before we reach our destination, we make an one-hour stop at Rethymnon city.

Right after that we return to Chania and to your hotels. 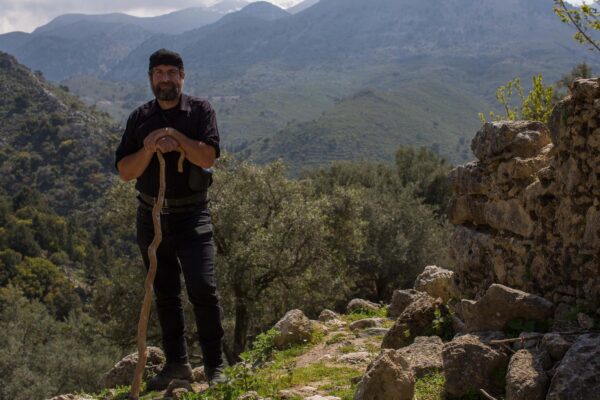